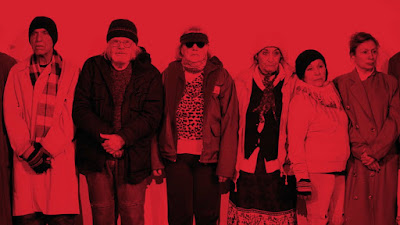 Politics, psychoanalysis, performance and art collide in a film by artist Dora Garcia. Recreating events in the 1960’s and 70’s in Argentina when there was a military coup the film attempts to show the events in a way how they happened and to discuss their ramifications.

I am not sure what I think of this film or how it is. A unique one of a kind piece of cinema it blends together a variety of styles in order to discuss history both past and present. There is a lot to take in and I know that I am going to have to see the film a second (and maybe a third) time in order to begin to piece it together. Complicating matters is the fact that the film is rooted in Argentine history of which I only have a little knowledge. While I could follow the larger picture I was kind of lost in the details.

Should you see the film? If you are adventurous yes. This is a one of a kind blending of styles and is very much the sort of thing that you need to see to have your horizons broadened. What will you make of it I’m not certain, but there is enough food for thought here to give you a a great deal to ponder.